Clachaig Mocha Stout - "It does what it says on the tin"

Recent visitors to the bar may have noticed a new beer on the handpumps  - a Clachaig Mocha Stout, the result of a collaboration brew with Fiona & Euan at the Loch Lomond Brewery.

Originally it was intended to be the latest home brew project, but finding the time always proved difficult. So when those folks at Loch Lomond suggested they give a hand, it was too good an opportunity to miss. Besides, any day away from the office is a good day. Why a mocha stout? Simply because that's what was tickling the taste buds when deciding what beer to brew next. Three of our favourite vices, beer, coffee & chocolate, in one glass. What's not to like? 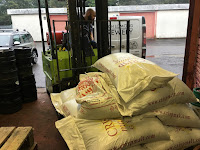 So, it was an early morning start for the drive down to Alexandria at the bottom end of Loch Lomond, arriving to find Euan had already got the kettle on. No early morning cuppa followed though, he was simply making sure we'd plenty of hot water for the first stage of the brewing process.

First things first, we started by raiding the grain store for the various malts needed for this brew. A job made much easier thanks to the fork lift truck. 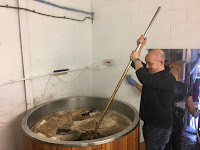 Unfortunately, neither Apple or Google have come up with a scratch 'n'sniff app, so you'll just have to take our word for it... the aroma from the mash was superb. Hints of roasted coffee and chocolate aromas were already coming through from the mash, though these from the various malts, rather than actual coffee or chocolate additions which would come later. 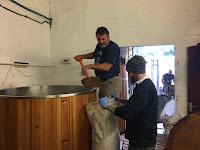 "What goes in, must come out". No fancy high tech plant here. Beer is still brewed the good old fashioned way. Hand crafted you could say.
"So. How do we get the spent grains out then?"
Next thing I know, I'm reminded of that scene in The Good, The Bad & the Ugly, with Clint Eastwood lobbing a shovel at Eli Wallach...
"You see, in this World there's two kinds of people my friend,.. you dig!" 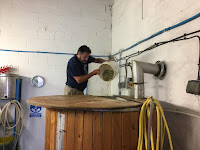 Aroma hops are added at "flame out", and the hot wort is cooled, filtered and transferred to the fermentation vessel where the yeast is left to do its work. Here too, come the last additions, as roasted coffee grounds and cocoa nibs are added towards the end of fermentation.

Once fermentation is complete, it's off the the conditioning tank to allow the flavours to mature, before being racked into casks for the journey to Glencoe. A few more days final conditioning in our cellar, and it's time to taste the result.

Our verdict? We got what we were looking for, and it "does what it says on the tin". Rich coffee and chocolate flavours much in evidence, without overpowering the beer. But, of course, if you really want to know how it turned out, then there's only one way to find out. Pop in for a pint.
Slàinte! 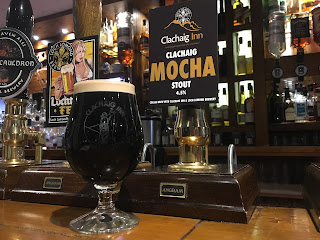