We’re always keen to improve our product knowledge, so when the chance came up to combine this with a day at the beach rather than at work it seemed too good to be true. So, of course it was.

No lounging around topping up the tan, no beach barbeque, and worse still, not an ice cream van in sight. Instead the morning was spent gathering bladderwrack seaweed. 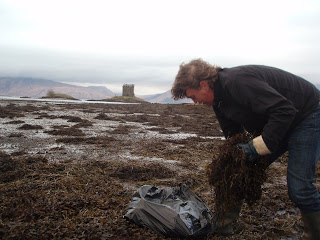 I dare say it may seem an odd thing to do to some, but for brewer Bruce Williams, it’s just “another day in the office”. Bruce and Scott Williams are behind Williams Brothers Brewing, the guys who for the best part of twenty years have supplied us here at Clachaig with numerous tasty beers. These have ranged from the more familiar ales like 80/-, to the more exotic (and historic) ones including Fraoch (Heather Ale), quite possibly our best selling beer over the years.

But tomorrow’s brew is Kelpie Seaweed Ale. So with that in mind, a short ten-minute drive brought us to the shoreline by Castle Stalker, just in time for low tide. Monty Python fans will of course know it by its alternative name, Castle Aaargh. Maybe we got the odd funny look or two from passers-by, but at least we weren’t subjected to taunts of French knights as the heroes of the film were.

Armed with a handfull of bags, and several pairs of scissors, we set about gathering one of the key ingredients for the brew. Cutting the seaweed rather than pulling it up leaves to roots intact, ensuring there’s plenty of seaweed for the next harvest.

Despite the weather, it has to be said it was a surprisingly pleasant way to spend a morning, and indeed is there a better to improve product knowledge than to occasionally get out and get involved with our local suppliers? Well, that’s my excuse for not working anyway!
Posted by Guy at 09:47