From Rags to Riches

Had a great night out at the SECC in Glasgow. A rare treat and first live band in ages. Snow Patrol were on fine form and pulled out all the stops with an excellent performance. Also found time for a Thai curry (not too many of these in Glencoe unless you cook 'em yourself) and would recommend Thai Siam if you find yourself in need and you're near Argyle Street. 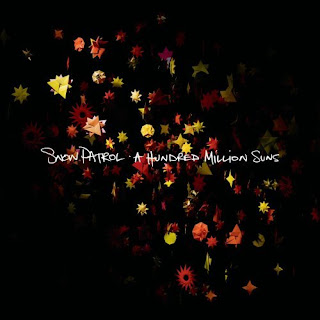 But what's that I hear you say. Whoop-de-do, but isn't this a Glencoe-based blog?

Well, I was just about to add that whilst jumping around Hall 4 of the SECC with another few thousand sweaty folk, I couldn't help but notice that the guy playing bass with Snow Patrol and looking like he was having the time of his life did look kind of familiar. Paul Wilson (look he even has his own Wiki page!) is in fact a local lad from Kinlochleven. And last I saw Paul, he was keeping the mountain bikes in our hire fleet in fine fettle, as a part time job after school. Yes, from Clachaig to Snow Patrol! A real (oily bike) rags to riches tale! Good on you, Paul!

P.S. Any chance you wanna do a gig in the Boots Bar? Its worth 20 quid and a couple of beers!
Posted by Clachaig Blogger at 13:39 No comments:

Having adopted our new local 'good cause', we've just paid over a cheque for £223 from our FebruaryFest fund-raising activities to date. The Parent Forum Fund Raising Group at Ballachulish Primary School are aiming to raise funds for enhanced childrens' play facilities at the school, as well as aiming for Eco School Status. 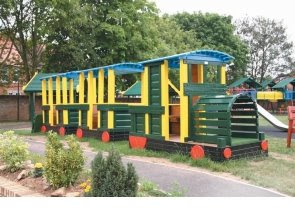 The first bits of equipment the school would like to acquire is a train (of the variety pictured above, courtesy of Timberline), though they also have their sights set on a boat a few other interactive pieces if funds permit.

We hope that the contribution you've generously helped us to raise so far helps them on their way.
Posted by Clachaig Blogger at 05:27 No comments:

There's a dazed look on a few faces this morning as we recover from an absolute belter of a weekend here at Clachaig. We're still trying to work out why this weekend was so much busier this weekend than last, as the weather, although fairly settled, was a whole lot milder this week than last. 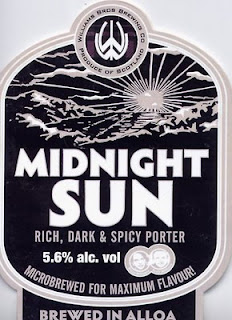 Its been great to see so many folk having a great time at the beer festival. As ever, the beers have been many and varied, but there are definitely a few favourites emerging from the selection so far.

One of these is Midnight Sun, brewed by the William's Brothers. Its a proper winter ale, being dark and spicy, and at 5.6% ABV its to be enjoyed in moderation! (I actually tried this thinking that it would be too sweet & strong to enjoy but was pleasantly surprised how drinkable it is - go easy is my advice, Ed) 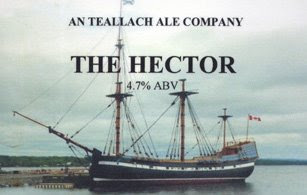 An Teallach Brewery, run by former Clachaig entertainer (and purveyor of terrible jokes) Davie Orr in Dundonnel, have come up trumps with a couple of new ales. The Hector is a lovely smooth stout named after the famous boat that sailed from Ullapool to what became Nova Scotia in the late 18th Century. 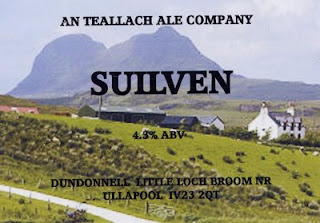 And Suilven, named after that famous whale backed big lump of a mountain thingy in the image on the pump clip above, has won over a few fans, being a nice light hoppy number.

These are just 3 of the ales featured in our FebruaryFest Beer Festival, though sometimes its a case of blink and you'll miss it as a bar full of folk get a taste for the latest addition to the range. However, tell us your favourites, and we'll gladly bring them back again after the festival finishes.
Posted by Clachaig Blogger at 05:17 No comments:

A huge thank you from Glencoe Primary School to all of you who generously gave a pound or 2, or 3, when harassed into buying a raffle ticket for our 'good cause'.

We've recently heard from the head teacher advising us that they've now reached their target of £3000 required for a Balance Trail at the school. Of this, Clachaig customers raised £1151.90. 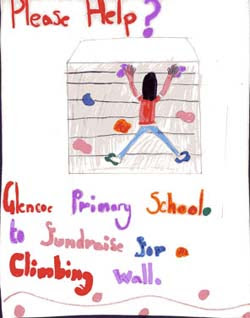 Hopefully, we'll be able to bring you some photos in due course of real thing in situ at the school.

And we've already identified the next project and with FebruaryFest in full swing have managed to raise some funds to get a head start. This time we're hoping to raise at least £1000 for playground improvements at Ballachulish Primary School. The playground has just been resurfaced and funds are required to buy play equipment.
Posted by Clachaig Blogger at 04:56 No comments:

A busy, busy night at Clachaig last night. A combination of half term, snow on the hills, FebruaryFest Beer festival and perhaps even Valentine's Day and it all adds up to a big night out. 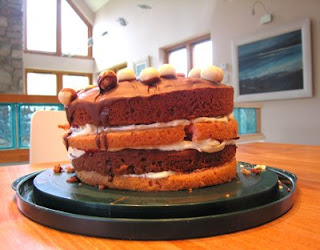 Ah..., yes. Valentine's Day. So did you get treated to a romantic climb up a Munro followed by an amorous pint of cask ale? Or did Cupid fire his bow across a steaming bowl of Nachos followed by a boogie to Davy Tait in the Boots Bar? Or did you get a huge big cake - like me!

With a full programme of events in the beer festival programme lined up for the coming week, and with accommodation all but fully booked for the week, it looks like its going to be a busy week ahead at Clachaig.
Posted by Clachaig Blogger at 04:52 No comments:

Great snow - but be quick!

Probably not what we should be writing on a Glencoe blog, but had a great day skiing at Cairngorm yesterday. The weather was a little dreich across in the west and as its been a while since we last visited, thought it time for a change. 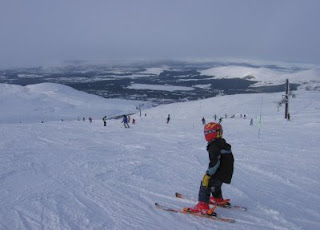 The drive across was quite spectacular, with deep snow lining the road verges and hanging from the branches all the way across from Spean Bridge. So nice to see in Scotland. The car parks were full to overflowing and there were people out enjoying the winter wonderland everywhere. Loch Morlich was frozen (unsurprising at -18 degrees!) and had a covering of snow on it (see the middle of the above photo). And the snow was plentiful and in great condition. 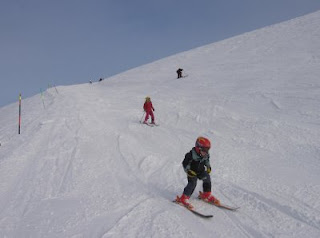 There's still plenty of snow here on the west side - though everywhere looks like its going to see a bit of a thaw over the next few days. And though we decided to head east yesterday, both Nevis Range and Glencoe Mountain are reaping the benefits of a proper Scottish winter - for the moment at least!
Posted by Clachaig Blogger at 03:07 No comments:

Unsurprisingly, in the lead up to the anniversary of the Massacre, we're not the only ones finding space to write about it. Here's a copy of an article published in The Sunday Post, and it looks like our No Hawkers or Campbells sign gets a mention again too! 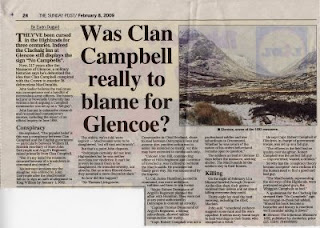 So, were the Clan Campbell really to blame? Don't ask us, we're just hoteliers! Instead, get yourself a copy of the book from somewhere like Amazon.

Best seller or not, chances are the sign won't be going any time soon. It was put there by a former owner - a MacDonald, and far be it for us to consider changing the policy of the last 40 years!
Posted by Clachaig Blogger at 07:19 No comments:

Anniversary of the Massacre of Glencoe 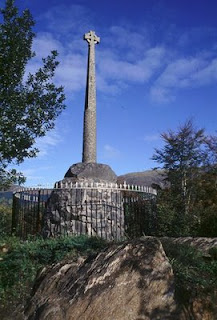 The story of the massacre, commonly referred to as 'murder under trust' is well documented and you can find more information on the GlencoeScotland web site.

Fortunately, things have moved on a little since 1692. Glencoe is perhaps now best known across the world for its rugged mountain scenery, though the acts of a cold February night 317 years ago are still not forgotten.
Posted by Clachaig Blogger at 08:21 No comments: