Ever wondered what Santa does when he's finished a long shift delivering pressies to everyone? Well, he takes a nice refreshing swim in the loch, of course!

On Christmas morning, Santa invites anyone mad enough to join him and Mrs Claus for a swim in Loch Leven. And the odd thing is that there was a fair crowd to join them this year. Even Santa didn't see that one coming.


In all 18 hardy souls, plus 2 daft collies, met at the lochside by the Isles of Glencoe for a bit of a dip / swim. Storm Barbara was just abour ready to move on. Storm Conor was just about to put in an appearance. Out on the loch there were some impressive squalls, and enough white tops on the waves to wonder whether bring the surfboards down wouldn't actually have been a bad idea. Still, if you're going to jump in a loch and get wet anyway, ...


Swimming styles varied.  Dave arrived in a dry suit, which was quite a good idea, or at least would have been had he remembered his gloves. His was more of a bob than a swim. For some it was just a quick dip and out. For most at least, there was a lap of the buoy. And the Loch Leven Ladies, a group of regular swimmers on their home turf, there was a full lap of the bay. Alas, no one braved the waters without a suit of some sort this year.


But none of that matters. What does matter was that 18 people had a great time while taking taking part in a random act of madness on Chirstmas morning. They're all heroes. And you can bet that their Christmas dinner tasted absolutely fantastic!

Its that time of year again. Christmas is just around the corner.

Which must mean it is time for the Clachaig Christmas Party.

This is now our fifth year hosting the party and we are seeing more and more regulars returning each year.
But can you blame them? Greeted with a warm mug of mulled cider as you are seated at your table, the smell of the hog roasting away as you enter the bar. It doesn't get much better than that. 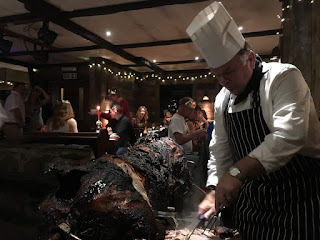 Once all the food was finished the Big Man himself even graced us with his presense with the aid of his assistant he made his way round the bar making sure everyone got a wee something. 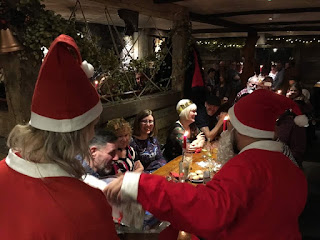 After Santa had handed out presents to all the good boys and girls, Mak-A-Din got the gutairs out and got most of the bar up dancing helping to burn off all that food.

All in all it was another great success. Everything went smoothly and everyone seemed to have a great night.

All of us here at the Clachaig had a great night as well but the best moment of the night  probably came when we were able to pounce like Vultures on the left overs.

From all of us here at the Clachaig we wish you a Merry Christmas and hopefully we will see you all for the Clachaig Hogmanay Hoolie
Posted by Clachaig Blogger at 09:45 No comments:

How hard can it be?

It's in use from early in the morning till late in the evening every day, all year round. Just quite how many feet pass over it every 24hrs doesn't bear thinking about. No wonder it was showing signs of wear after years of use and abuse. Time to replace the specialist vinyl floor covering the in the kitchen at Clachaig.

It'll be fine. I mean, just how hard can it be?


Well, first of all everything has to come out to be able to get at the floor itself. So where do we put the ovens, the hot cupboards, the fridges, chillers, work benches, dishwasher and sinks? And then how do we serve food while the kitchen has been emptied? And if we can't serve food, and we're a food business open 24/7, then how do we manage that?

Just one of the many challenges sent to try us.

Whilst we we've been looking forward to a little quiet time at the the end of a very long season, it's been far from getting the feet up and chilling out. Instead, it's been a chaotic week of juggling. But we've done it. A few days of disruption, but we've now got a kitchen with a new floor and we're good to go with the food production again. Phew! 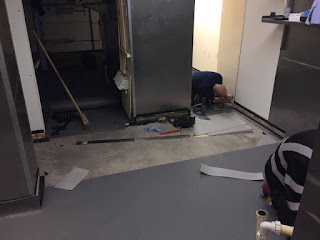 And just to make life even more interesting, we replaced the carpet in the office too. Well, it had been there since 1970, er... something.