We recently let slip in our monthly eNews that we are planning a bit of a makeover at Clachaig this coming autumn. Never ones to sit on our laurels, the time is now right to re-invigorate the public areas again. Most notably, the Bidean Lounge Bar, the dining room, and the Boots Bar.

And rather than simply drop this on you in November, we decided it would be a good idea to float the idea with you first. We asked for your feedback, and mostly using our Facebook page, we got a good few comments straight away. Fair to say that the overriding message was "Don't go changing", with some responses being a little more emphatic than others. 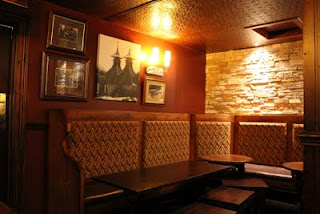 The Grog & Gruel, Fort William - the same, but different.

The issue then, is quite what would constitute a 'change'. Well, we're not spilling the beans yet. Not entirely anyway, and that's mostly because it's what you might call a 'fluid situation'. That's right, the plans haven't been finalised yet. 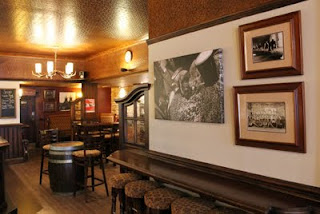 You know you've done it right when customers think something might be different but aren't sure quite what it is!
From the tone of some of the comments received you'd think that we were about to change the Boots Bar into a wine bar. We don't blame you, and it's actually pretty fantastic to hear that there are so many loyal fans who take such an active interest in the place. But, would we? Would we really? We've spent the last 27 years creating the atmosphere at Clachaig. You might not see Ed & Guy so much these days. That's mostly because Gordon and the team do such a fantastic job without us. But we're still here, hidden in a little black hole in a dark corner of Clachaig, only let out on special occasions. And we're still as committed to ever as making Clachaig your number one 'escape to the hills (but with a little comfort and beer)' destination.

It's more than 20 years since the Boots Bar saw any real change. It's due for a little TLC and we're confident that regardless of how much of a die hard Boots Bar fan you are, you'll still love the place come Christmas. Maybe even a little more? Much of the work will be cosmetic, giving the place a bit of a lift, making it a little more comfortable and a little more inviting.

We've already been trialling a few ideas. Have you noticed the new table and benches being tested to ensure that they are man enough for the job? (They fell apart last week!) Have you spotted the changes to the whisky displays on the back gantry. (We've increased the range by a further 40 malts). We're not just firing from the hip with this refurbishment. There's a lot of thought gone into it over a long period of time, and we've still got a long way to go.

We went through a similar process last year with The Grog & Gruel in Fort William. Established in 1994, the pub had a very strong identity and a very loyal following. However, after 16 years we reckoned that a makeover was long overdue. The problem was how to refresh the feel of the alehouse whilst keeping very much to the distinctive style; improve it without really changing it. At times it felt like a huge leap of faith, but we reckon we pulled it off quite well in the end, and it's far to say that we've had nothing but complements about the new look ever since. So, it is possible.

That's about all that we've got to say for the moment. As plans progress we'll keep you updated, so join us on Facebook, or sign up for our eNewsletter. But be warned. We've got a wicked sense of humour and we might just drop in a few red herrings and the odd curve ball out of the left field. Sorry, that's all for now. Got to dash as the crystal chandelier delivery has just arrived.
Posted by Clachaig Blogger at 01:47 No comments:

Nervous laughs all round as we got into our sea kayaks for the first time. Getting a comfortable seating position didn't take too long and it seemed stable enough, but there again we were still on the grass by the bays at Ballachulish. Next came the tricky bit, getting into them on the water! 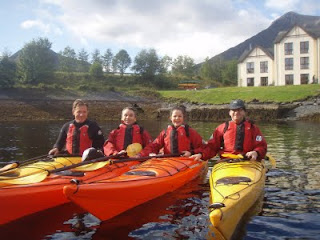 The team manoeuvres into the raft formation.
Paddle Lochaber are based in Ballachulish and is run by Mark, a typically easy going and knowledgeable  enthusiast for the sport. He offers a variety of courses, for the complete beginners right through to the experts looking for a certification. The half day introductory session is a bargain at £35, with all equipment (wet suits too) included. Both Ed (director) and Gordon GM) had been lamenting for a while that they should really get out onto the water, and following a chance meeting at Clachaig's recent whisky tasting session, 2 spaces were booked. Brave talk, aided by the water of life, leading to fearing for life out on the water? 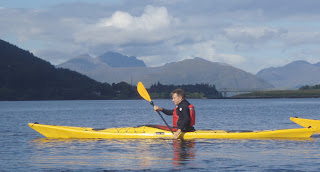 Ballachulish Bridge, the Ardgour hills beyond.
In no time at all, our little group of kayaking novices were out on the water in a perfect sheltered bay adjacent to Ballachulish village. Mark's laid back coaching style ensured that we were under no pressure to do more than we were comfortable with, and very soon we were all manoeuvring about the bay, albeit with the finesse of a fully laden supertanker. 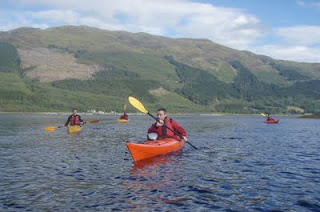 Further out on Loch Leven, heading for St. John's.
With our new found confidence we then set off on a tour of Loch Leven. We did seem to have chosen a fairly stunning day for it, with plenty of sunshine, but we all got the feeling that exploring the coastline would have been as much fun even without the sun.

In between the coaching on paddling techniques Mark dropped in plenty of bits of historical interest as we passed various landmarks, not least of which was the significance of the Ballachulish Slate Quarry which it has to be said, is best seen from the water. 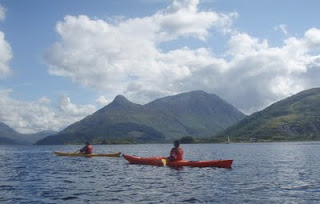 Towards Glencoe and the Pap of Glencoe
Herons, common seals, salmon farms, mussel farms, the Burial Isle,... and just a real pleasure being out on the water. Fantastic! I no time at all the morning session was over and we were safely back at the launch site. 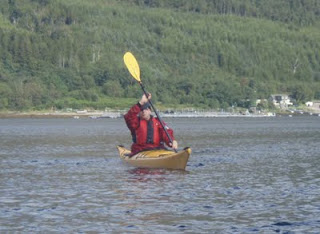 Gordon - last seen heading towards Oban
However, Ed decided that it was time to see whether getting out of a capsized boat really was as simple as Mark suggested it was, even if you're 6 ft 2in and feel like you're well and truly wedged into your boat. It is! And not only that, it's surprisingly easy to get back into your kayak again once in the water too, though it has to be said, that this doesn't usually form part of the half day introductory session!
Posted by Clachaig Blogger at 05:53 No comments: