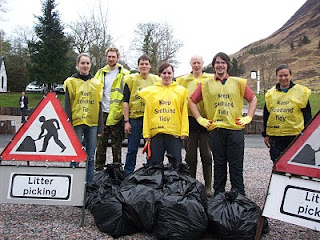 Following the successful efforts of previous years Clachaig staff once again 'volunteered' to assist with our annual litterpick along the old village road as part of our Environmental Impact commitment.

Once again we teamed up with Keith & Davina from the Glencoe Independent Hostel and the Highland Council who helped us out with some signage, rubber gloves and bags. Thanks also to Claymore garage, Glencoe for the safety gloves.

We covered the road verges from the junction with the A82 at the new bridge right the way down to the Green Pool at the Forestry car park, just this side of Glencoe village and included the popular picnic spots on the riverbanks too. A good morning's work done with good humour and thoroughly deserving of the bacon rolls our kitchen provided when we'd finished.

Thanks to all for their contribution.
Posted by Clachaig Blogger at 00:49 No comments:

The winter that was.

A rare guest blogging moment as James adds a few words and a couple of pretty pics regarding the winter just gone...
-----------

After the harshest winter for decades, has spring finally arrived? With daffodils starting to bloom in the meadow and the snow melting, perhaps now is a good time to look back on a remarkable three months in Glencoe.

The first major snowfall of the winter came just before Christmas, and was followed by Scotland's coldest January since 1914. The snow remained on the ground on Rannoch Moor for almost 100 days, which meant the best season for skiing at White Corries for years. It came as a bit of surprise one day in late February when the BBC reported Glencoe ski centre as the "world's snowiest"! 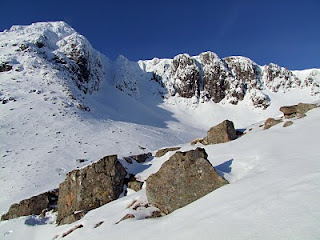 It was good news for winter climbers too. Conditions were consistently good for almost three months, with several first ascents taking place in Glencoe. New ice routes were even climbed on the crags just above the Inn! Nice to see that none of it was wasted on Clachaig staff either, who were often out enjoying the snow, climbing, hill-walking and even snow-boating during their
breaks from work. You know it's a real winter when the staff are cutting steps in the snow with ice-axes in order to walk the 30 yards to work in the morning.

It hasn't been all fun and games though; several huge avalanches occurred in Glencoe between January and March, one of which could be seen all too clearly from the windows of the Lounge bar in the Clachaig. Even after the rapid thaw and heavy rain of the last few days, the remains of the avalanche debris can still be very clearly seen. 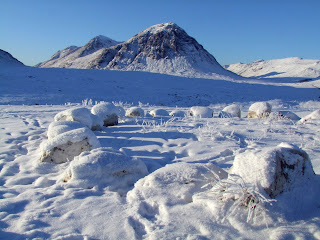 So three months and several hundred burned logs later, winter appears to be finally coming to a close. Easter is almost behind us, but with the May Beer Festival not too far away, a change of pace and the summer are just around the corner.
Posted by Clachaig Blogger at 13:51 No comments:

Last week it may have looked like an impossibly difficult hand to play at Scrabble. This week, the unpronouncable is the scurge of travellers the world over.

For the most part, you watch the news and it's all stories about things that affect other people. And then slowly you start to realise that some of these world events actually affect things much closer to home.

Fortunately (I think!), we had just flown into Glasgow from Geneva just before the airport was closed. Travelling with young children is hard enough, particularly in the EasyJet chaos of GVA on a busy ski weekend. But just exactly how do you cope when your flight is cancelled? In the first instance, give them chocolate. That keeps them quiet for about 30 seconds. The remnants of an Easter Egg would do the trick. 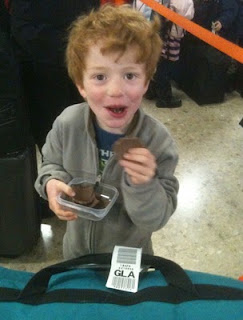 Just exactly what would we have done with ourselves if we'd had to stay in Argentiere for another week or two? Now let me think about that... 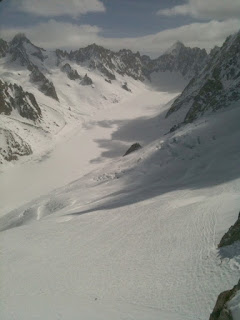 Spot the skier!
The view over the Argentiere Glacier from 3300m -
guaranteed spring skiing at these altitudes.
But the effects are being felt much closer to home. Already, we've received a number of cancellations from customers who were flying as part of their visit to Glencoe. I don't suppose we'd ever really thought about the proportion of guests who use flights as part of their travel, as we'd always thought of ourselves as a road destination. But with Glasgow airport just down the road, and cheap flights in from across Europe, it shouldn't be such a surprise.

Whilst many travellers are still trying to get home, we also know that there's plenty who just aren't going to book a flight until they know more about how long things are going to be affected. So, challenges for tourism again, as we potentially lose on the 'long haul' markets, but look to gain on our domestic market. Life's nothing if not a challenge!
Posted by Clachaig Blogger at 06:34 No comments:

Can't see a cloud in the sky today. Again. A bit of good old high pressure has found the right place to sit for a few days, making it simply gorgeous. Warm (though getting cooler), clear, bright, quiet and midge free. And I'm stuck in the office again. Joy! 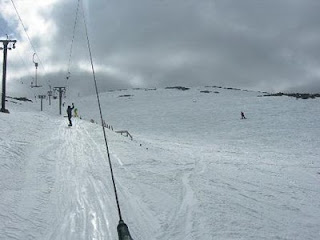 However, I'm easily distracted, and with emails the one just in from Glencoe Mountain, my sedentary status may well be short lived. 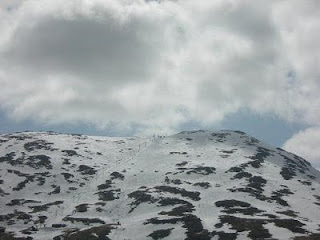 Still a great cover on the top of the mountain......

All upper runs still have an excellent cover of spring snow on a firm base. the forecast for the next few days is for an overnight frost which should firm up the snow and provide lovely skiing.

There are still many great off piste opportunities on the hill, including some great routes between the main basin T-bar and Rannoch Glades and there is still some great skiing to be enjoyed down the East ridge, and radio gulley (area around the Flypaper).

Middle runs are very sketchy now although it is still possible to get down Mugs alley as long as you don't mind a bit of combat skiing.

The plateau run and the low road are disappearing fast.

The Plateau Poma uptrack has had it's day. Transport to the Cliffhanger chair is now in the posh new Glencoe taxi. The very old bouncy Argo has been upgraded to a posh "new" Landrover Discovery.

The Poma uptrack is now available to ski back down at the end of the day.

The weather for the next couple of days is looking great. Don't forget the T-shirt, shades and suncream.

P.S We are still looking for more people to enter the MacMillan event on the 25th April.
Register for MacMillan Cancer Support Ski and Snowboard Summit Spectacular
Posted by Clachaig Blogger at 03:15 No comments:

Spring is in the air - What's in a name? 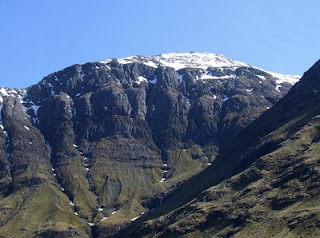 Just as the Easter break comes to the end the weather finally decides to brighten up, the daffodils sprout through the snow and lambs are popping out all over the place. Ah! Spring is in the air and that can only mean one thing...eh! well, two things then, if you include our Spring beer festival, Mayfest.

Our male staff are especially looking forward to it (Mayfest that is!) if the newspapers are to be believed. The Independent & the Telegraph (therefore it must be true) recently carried two separate articles about the fairer sex discovering cask ale. Now we occasionally raise our heads from deep beneath the sand and are aware of the current industry trends but this is surely not news. We've been serving the 'ladies' with cask ale for years without any fanfare.

However, Annabel Smith, Britain's first and only female Cask Marque beer inspector says, ''if you want women to drink beer, whatever you do, don't call it "bitter". Try "brunette", "blonde" or "golden" instead, or mention "floral", "honey" and "caramel" flavours. "We've been brainwashed into thinking it's not right for anyone with heels and lipstick to drink beer,"
''So bring on the golden beers with names such as Organic Honey Dew, Waggledance or the award-winning Triple Chocoholic chocolate stout''

Anyone for a pint of Sheep Shagger, Lusty May or Dogs Bollocks then?
Posted by Clachaig Blogger at 08:17 2 comments: 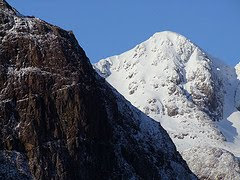 We've had one of the best winters for years and climbers and skiers alike were licking their lips at the prospect of great conditions come the Easter break. It looked like there would be some disappointment after a week or so of mild & wet weather, however, prayers have been answered and the snow returned with a vengeance as blizzards hit the Glen earlier this week. OK!, so it blocked a few roads and delayed the trains but anyone heading this way will be well rewarded. 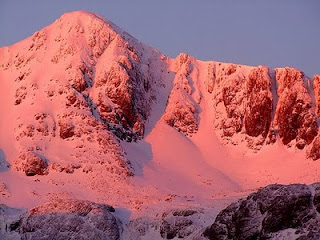 Our staff, as usual, are pulling out all the stops at Clachaig and the Boots bar will be 'rocking' to Lyra Celtica and Bonnie & Jim over the weekend.
The two Roddies, Alex & James, our in-house aficionados on all things craggy, jagged & icy have both reported wonderful conditions on the Mountains - with the usual safety caveats of course.
Skiers will be heartened to hear of fresh snowfalls overnight at both Glencoe & Nevis range with the forecast for more on the way making excellent conditions this weekend....and no queues.

If you don't fit in to either aforementioned categories you can still enjoy the Easter break and get into the hills as Glencoe Mountain are having an Easter Eggstravaganza 3rd, 4th 5th April with face painting, duck racing & egg 'rolling'.... something for everyone.

And when you've had enough excitement just relax with a refreshment, or two, in front of our log fire....Happy Easter from all at Clachaig.