Thanks to everyone who entered our caption competition. It was supposed to be easy for us. We get a couple of dozen entries, have a chuckle, select a really funny one and make someone happy with the grand prize of a bottle of Benromach 10 year old single malt. (Mmmm..., nice!)


But it didn't turn out that way. Maybe it was all that naked flesh that just got you too excited. Maybe it was the prospect of a free bottle of whisky. Whatever, the couple of dozen entries has run into the hundreds, and it's made a simple task nigh on impossible! Our 'last call for entries' brought in 145 additional suggestions just on its own.

There's also 45 (at the last count) more posts to be found in the comments area of our original blog entry as well. Rescue Choppers indeed, madam! 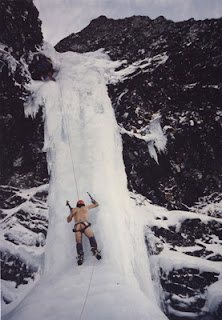 So, with apologies to anyone that we've missed, we've tried to include all the entries here for you to browse, including various references to cracks and cravasses and having a 3rd ice tool. We've cut and pasted from email, and we've taken some screen shots from Facebook. Please don't shout at us if you can't see yours, we did read them all.


And, oh how we've laughed. Productivity has fallen considerably in June as we've been rolling around the floor at your many captions. Maybe we should be introducing a stand up comedy night in the Boots Bar, as clearly we have so many comedians as customers.

Choosing "the best" for the prize simply hasn't been possible. The best solution was to put the ones that really made us giggle into a metaphorical hat and put out a winner.

Nice one Iain. Get in touch and claim your prize.

We also have some t-shirts for...

Charles GordonFirst Ascent of the Shrivel Devil. Not hard but very severe. (N-HVS).


Alistair Woodburne
Don't look now Rick, but is that a crack in the ice! ;)

Wee Thumb
After 15 years of winter climbing, Rick should have known that ice screws are not pink
(Not sure if that's a name or part of the joke!)

Peter ToddHard climb, but he rose to the occasion

and finally a cheeky one from

Thanks to everyone who joined in with the crack (!) on this occasion. You're all heroes and it's you that makes Clachaig what it is. 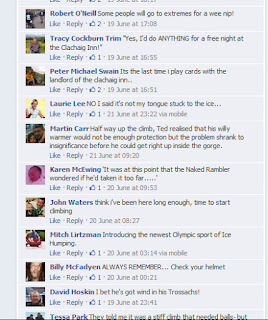 Don't look now Rick, but is that a crack in the ice! ;)
Alistair Woodburne


Expose yourself to Glencoe
Michael Gomez. 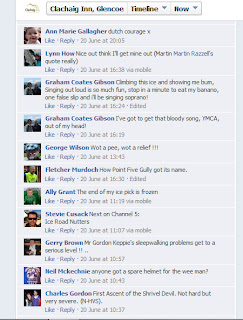 After 15 years of winter climbing, Rick should have known that ice screws are not pink
Wee Thumb

Hard climb, but he rose to the occasion
Peter Todd 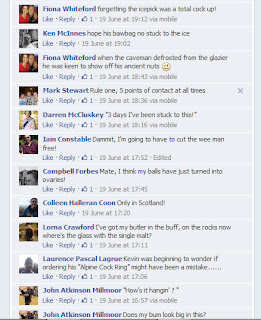 “By anchoring point #5, it is now possible to pivot 360 Degrees “
OR
“Who needs Spider Man”
OR
“MR Winky needs a helmet”
OR
“5 points &  2 helmets”
OR
“ enjoying the Beauty of Glencoe….tackling the west face of Aonach Dubh….mistaking Elliot’s Downfall for your wife….PRICELESS
Joe Lyon

From where I'm standing, this must be the south face!
Andy Holmes

Everything is red from the cold: I'm beginning to look like the five of diamonds ...
DianeG 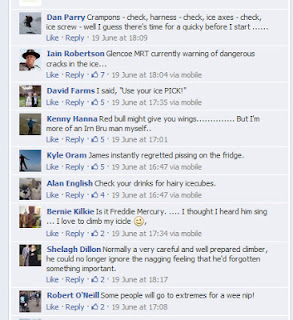 "Wow! I seem to have developed a third ice pick! That could come in very handy!"
Sorry :)
Shauna
Did I forget something?
Aline.Faben


Hands, knees and boomp-a-daisy.
just to keep it clean.

Gives him an extra digit for his carabiner.
Regards Jims

"It was only now that Rick regretted his parents' decision to have him circumcised...'
Robert Dann Hows about, "It's not my tongue that's stuck this time..."
All the best,
Matt

“Pardon me, do you happen to have any Grey Poupon?”
“Butt of course!!” 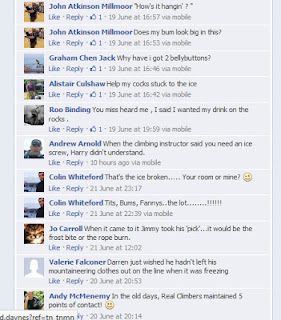 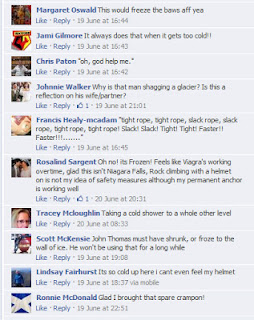 "Why did I have to say to her I'll do anything. Flowers. Flowers!"
Andy Colvin

Sadly for Dave, he had misunderstood the pre-climb brief.He was actually told to 'head up for the Bluff'!
Stephen MacPhee

Hope this center peg holds out 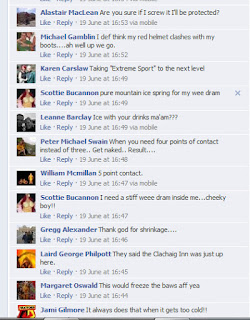 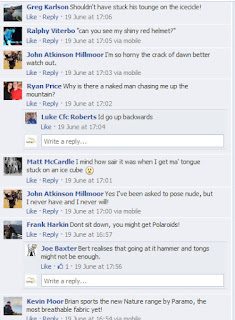 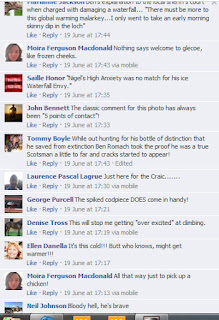 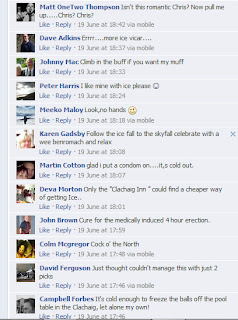 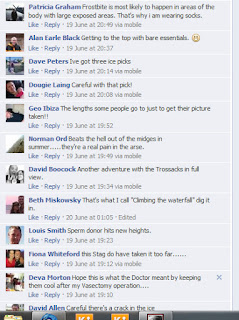 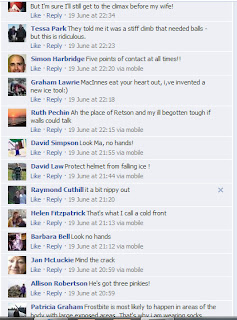 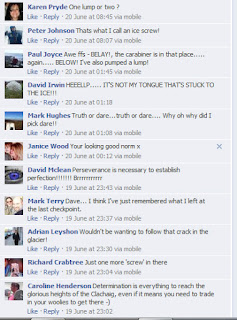 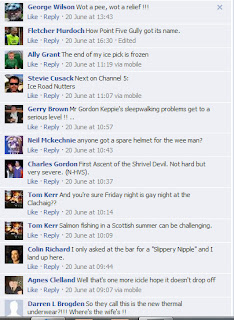