If a gathering of lions is referred to as a pride, and a group of baboons is a flange, what then do you think is the collective noun when a collective of Scottish Independent Brewers all find themselves in the same bar? 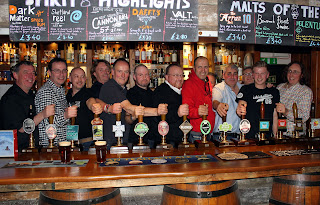 It would have been handy to know on Thursday (14th April), as that is exactly what happened at Clachaig Inn as a dozen of Scotland’s brewers came together for an informal gathering in Glencoe.  Organised by Clachaig, the idea was to bring together businesses who face very similar issues, but who rarely get to meet and chat.

There was plenty of time to share ideas and talk about the more serious aspects of the business. Unsurprisingly, there was even more time for more frivalous issues, as you might expect from a networking evening with the central theme (and refreshment) being beer. 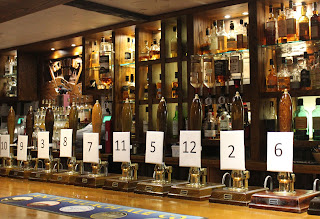 The main feature of the evening was a blind taste test, with each of the brewers invited to provide one of their brews. Marks were awarded for each beer, with points awarded for appearance, aroma and taste. With the scores totted up, the award for the best beer of the evening was given to The Hector, a smooth sweet stout from An Teallach Ale Co. A special prize (not that special!) was awarded to Carlo from Black Wolf Brewery who was the only one to correctly identify his own beer! 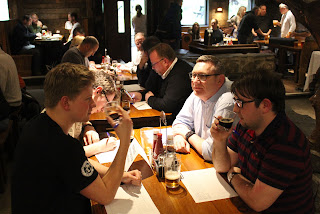 Clachaig director, Guy Daynes, also ensured that there was a special wild card played in the blind tasting, by including his own elderberry stout. It didn’t come last is about all we can say about it!

Everyone was also invited to bring along a few presentation pack samples of their products for a raffle. A fair pile was gathered and with it being a steady night in the bars in midweek April, the chances of winning a prize were high! £210 was raised for Glencoe Mountain Rescue. 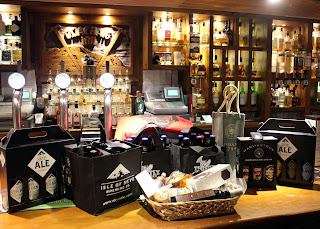 The Clachaig kitchen excelled once again with a smorgasbord of tasters from the menu, whilst the Loch Leven session musicians added to the atmosphere with their repertoire of toe tapping tunes.

All told the Clachaig Brewers' Gathering was a resounding success. Naturally, everyone was quite glad to have solved all the problems of the industry solved in one short evening (amazing what tasting a dozen beers can do for you). However, the real success of the evening was simply in bringing everyone together so that for one evening in the year at least there was an opportunity to simply meet up and chat.

An excellent evening and by all accounts one that we’ll have to repeat again.

We look forward to an interesting summer of ales, stouts, lagers and ciders…

The Isle of Skye Brewing Co