It's a bit of a cheesey title for a blog post, but it's actually the only one that really fits the bill when it comes to telling you about our couple of days away courtesey of whisky merchants, Gordon & Macphail, last week.

The great thing about working in a small business is that you can choose who you do business with and how you do that business. Over the last couple of years, we've been much more particular about this, and we've been slowly discovering more about our products and our suppliers, to make sure they fit with the way we want Clachaig to trade.

Ales have long since been scrutinised, and Guy has spent his fair share of time collecting seaweed for William's Bros and their Kelpie Seaweed Ale, and digging out the mash tuns at the brewery. Attentions for this week were firmly focussed on whisky, and who were we to turn down an invitation from Gordon & Macphail, owners of the Benromach Distillery, to pop along and work in the distillery for a day.


First off, was a visit to the Speyside Cooperage at Craigellachie. You can't make a good whisky without a good cask, so we guess that learning what makes a good cask is fairly important if you're going to be distilling some whisky. 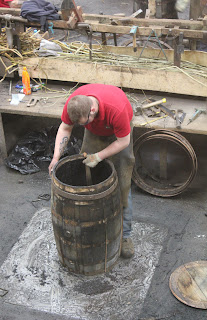 Rather than making new casks, the job in hand was to reduce the size of a batch of casks ready for a taking to a nearby distillery. 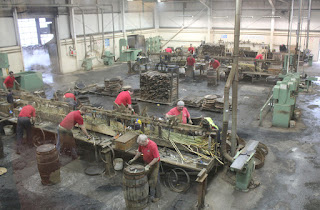 These guys are paid on piece rates. The more they produce, the more they earn. This might explain why they were going an incredible pace, running around the workshop floor like worker ants dressed in red polo shirts. It's a fascinating place, and should you find yourselves in Speyside, we can highly recommend that you call in for a look see. There's also the obligatory tea room for cakes too!


Next we moved on to Elgin and Gordon & Macphail's HQ. Our whisky has been coming from here for a couple of decades, so it was great to see who we've been dealing with for all these years. But best of all was the tour of the bonded warehouses and the racks and racks of maturing whisky. Just when you think you've seen it all, around another corner appears another endless tier of casks. 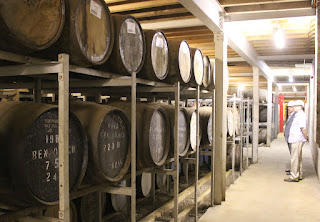 There's obviously a fair bit of Benromach here, after all they own the distillery, but as merchants there's also any number of other distillerys' whisky, all slowly maturing till they're ready for bottling in the adjacent plant room. There's one or two rather interesting looking casks lurking amongst the regular stuff. However, as we've signed the official secrets act, we couldn't possibly tell you what we've seen.

And then there's the Gordon and Macphail shop. A little gem in the heart of Elgin, stocked with wines, beers, a deli counter and, naturally, a fairly impressive whisky room. Their 800 whiskies makes our 250 look a little amateurish! And then there was a bit of tasting. To make good whisky, you have to understand a little about flavour. So we paid good attention to this bit, though I don't recall where all those empty glasses came from.


So, day 1 was a real learning journey, taking in the many elements of the whisky production and supply chain. But day 2 was about some hard graft. We were passed to the safe but rather huge hands of Mike, the distiller at Benromach Distillery. We were his apprentices for the day.


Now, we could tell you about malt, milling, mashing, wash backs, the wash still, the spirit still, the spirit safe, the SRWV and the many other tricks of the trade that us trained professionals now know all about. But we won't as we'd probably blind you with too much science, and besides, my brain still hurts from trying to get to grips with it all. Suffice to say, been there, done that, and we reckon that the Benromach 10 year old in 2022 will be a particularly cracking wee tipple. 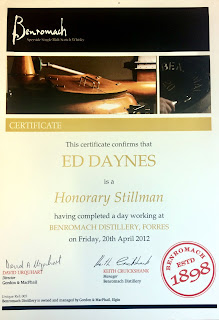 So all in all an absolutely tremendous trip. And a certificate to go with. Like, it seems, Prince Charles, we're now in the exclusive club of being Honorary Stillmen. A huge thank you to Richard and Stephen at G&M and Keith and Mike at the distillery for the hospitality and a very educational and worthwhile couple of days.


Right what are we doing next week?  Where does our wine come from...?