Over the moon! Yes, that's pretty much the response to winning the Pub Restaurant or Cafe category at The Great Outdoors Awards, announced in Kendal this week. 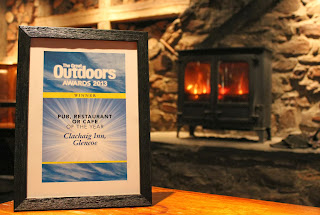 In this game, as I suspect is the case in any other, a little bit of recognition can go a long way. For the most part this comes from lots of happy faces leaving the Boots Bar after another great Saturday night out in Glencoe. However, when it comes in the form of an award such as this, then it certainly delivers an extra boost for morale, particularly as it was decided by a public vote.

So, unaccustomed to public speaking as I am, if there is a thank you speech to be done then it must surely start with large amounts of gratitude to all the staff who keep Clachaig going, from day to day, from month to month and from year to year. At times it's hard graft. But equally, at times, it's great fun. New faces come, whilst others move on. The alumni is now huge, and spread around the world. But the one constant is the effort that goes in to keeping Clachaig as, well, Clachaig.

And there's also a huge thank you to all our customers (and particularly the ones that voted!) Without your support there'd be no award, and no Clachaig. As we approach our 30 year anniversary at Clachaig, our promise must be that we'll keep on doing it while you keep on coming. For a few more years at least!

On a slightly more self effacing note, I can't help but think that all the various businesses nominated in the awards, and there were lots of them from various sectors trading in and around "The Great Outdoors", were winners. I suspect that anyone who has their favourite jacket, their coveted piece of gucci kit, or their favourite walk with the pub/cafe/restaurant at the end of it will know what I mean. There's nothing quite like getting out in the fresh air and experiencing The Great Outdoors and being part of the culture that goes with it.

Speeches over. Back to the day job. Now, what to do with this..? 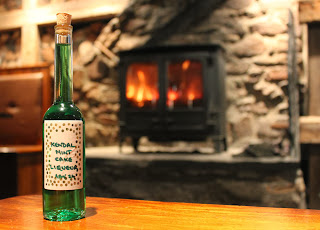