Day 1. Yikes! No messing about! 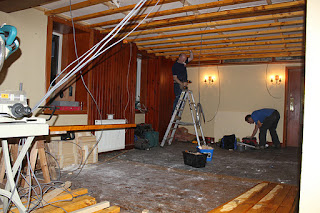 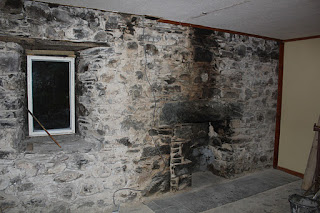 Time for a makeover

No, we haven't moved the pool table into the dining room. We're just having a bit of a clear out in anticipation of the builders moving in first thing on Monday morning. 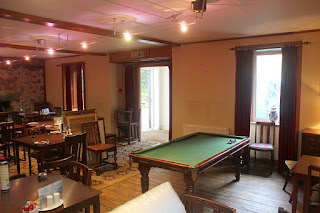 This table, with hidden depths, has been the centre piece of the dining room since May 1984. Not quite a family heirloom, but one of the last remaining bits of furniture in the inn left over from our move northwards all those years ago. Finally, we've decided to reclaim it for the family.

The refurb starts here!
Posted by Clachaig Blogger at 05:11 No comments:

Here's a cracking reminder of what Lochaber looks like when the sun actually shines...

Outdoor Capital: 'Wish Ye Were Here' from Cut Media on Vimeo.
Posted by Clachaig Blogger at 02:04 No comments:

Join us for The Clachaig Christmas Party! 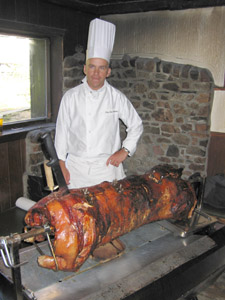 Stuff the turkey - it's a hog roast at Clachaig

We never do things by half here at Clachaig and to celebrate the re-opening of the refurbished Boots Bar we introduce the inaugural Clachaig Christmas Party Night.

With a definite Clachaig spin on festive food we’ve decided to stuff the turkey and go the whole hog….quite literally!

We'll have a Hog Roast Buffet, live music, Santa complete with a bulging sack and not a Brussels sprout in sight. Perfect for your Xmas party with friends, family or colleagues

Tuesday 20th December - £19.95 per person and the evening will include

Special accommodation tariff on a bed & breakfast basis at £25 per person if the taxi bill home again is looking a bit steep.

The last month has just flown by, as we've all been so busy with any number of jobs. We've had a succession of things breaking down or just giving up. At the end of a long and busy season we all feel a bit knackered, but quite why drains, roofs, and boilers should also get the end of season blues is anyone's guess.

And then there's Octoberfest, as we run through the last beer festival of the year. Unfortunately the autumn has been a little damp this year, and so getting out and about in the fantastic autumn scenery has been, whilst still possible, a little more gore-tex clad than most would prefer. Not that it's put a dampener on the festival itself. Numbers are slightly down on previous years, but the beers are still selling through nicely, with some of our newer (and brand new) brands proving to be the most popular. 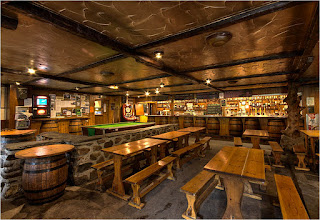 The Boots Bar - but how will it look on 3rd December?

But of all the things that we've been busy with this month, the most demanding has been our refurbishment plans. Much of the preparation work is now done, and we're now busy placing orders and planning the logistics of how it will all come together.

Not surprisingly, balancing budgets has been a huge challenge. However, we've been very determined not to compromise on the scope and the quality of the work, especially where the Boots Bar is concerned. The one thing that we've realised from these last few months is that if we're going to refresh the image, then we have to get it right. Actually, we knew that long before we made our intentions public, but it's been the over riding message of the feedback we've received so far. So in the final programme, we'll be concentrating on the Boots Bar and the Dining Room, whilst simply refreshing the Bidean Lounge Bar. 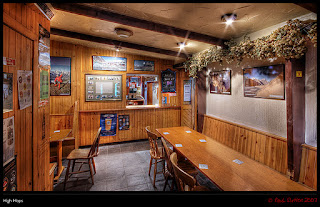 Changing times ahead too for the Snug Bar.

As of Monday morning coming (31st October) we'll be hard at it. We've given ourselves 2 weeks to give the Dining Room a complete makeover. Breakfasts in the meantime will be served in the Bidean Lounge.

The Boots Bar will be closing it's doors at the close of play on Saturday 12th November, and we hope to be back in business on Saturday 3rd December. Changes are that we'll still have some finishing touches to add, and will probably be hoping that the paint will be dry by the time we open the doors, but it's a plan...!

To mark the official re-opening, and also to ensure that we all get the chance to relax in time for Christmas, plans for a Clachaig Christmas Party are coming together for Tuesday 20th December. We reckon that you'll see enough turkey over Christmas, and so in true Clachaig style, dinner will feature a hog roast, and will be served in the Boots Bar. We hope that we'll see you there!