There’s a chill in the air, it won’t be long until the snow is arriving and we’re all off to do as much skiing as possible outside of working hours. However, before then we need to do something a little extra to keep warm. Spend hundreds of pounds on new winter clothing? Install extra heaters in to staff accommodation?

While tossing ideas around, there was one idea that stuck to the wall. It was an idea that could end up being a lot of fun, one that could help raise awareness to a cause close to all of us men, and even raise some money for charity. That’s right, this November at Clachaig Inn is becoming ‘Movember’!

Since 2004, the Movember Foundation charity has run Movember events to raise awareness and funds for men’s health issues, such as prostate cancer and depression, in Australia and New Zealand.
In 2007, events were launched in Ireland, Canada, Czech Republic, Denmark, Spain, the United Kingdom, Israel, South Africa, Taiwan and the United States. It has spread from Australia to South Africa, Europe and North America. In 2012 the Global Journal listed Movember as one of the top 100 NGOs (non government organization) in the world.

With the continued build and success of this event around the World, we’re sure that most people will already know about it. But what you might not know is what we’re doing for it.

From the top to the bottom of our family run business we’ll be taking part in growing some face fuzz, and hopefully looking as ridiculous as possible (not too challenging for some of us).  We’ll keep you posted via our Facebook page and creating photo galleries but we’re very happy to say that these galleries are all for you too! Yes, come and join us with your top lip caterpillars.

Send in the pictures of your effort as the month goes on to be added to our gallery, the photo with the most ‘likes’ will recieve a free T-shirt and we might well have a few spot prizes to hand, though we will naturally favour effort, enthusiasm and artistic interpretation over sheer chimp-like hairiness. And that’s not just an end of month reward, oh no!

But that’s not all!

We’ll be holding quizzes through the month and doing a bit of fund raising baking, AND…
If you’re participating via the Movember website, sign up to our Clachaig team for a very special promotion. Whoever raises the most cash for Movember, will receive a superb Henri Lloyd Stow Bag courtesy of Benromach Whisky, ideal for packing for your next trip to Glencoe.  Just another incentive for you guys to help us, help a good cause!

So to all Mo’ Bros and Mo’ Sistas, good luck in your fundraising and we thank you for support!
Posted by Clachaig Blogger at 03:23 No comments:

As soon as we say goodbye to summer, we find ourselves in the midst of planning for winter, not least of which is FebruaryFest and the Clachaig Winter Safety Lecture Series.

At this stage, in early October, some of the detail is confirmed, and some we're still fine tuning. One staple of the winter scene in February is the Winter Mountain Safety Lectures. Originally set up as a collaboration between Peter Daynes and Andy Fanshawe, the then National Officer of the BMC, the lectures have been running for the last 25 years. In more recent years the series has been co-ordinated by the Mountaineering Council of Scotland under their mountain safety initiative.

However, we faltered a little this year as the dreaded 'austerity measures' looked like we might be struggling to present a full line up.

The good news is that a sponsor for the 2013 has been secured, and the lectures will be back with a vengeance for this coming winter. So, once again, in proud association with the Mountaineering Council of Scotland, and our new sponsor, Mammut, we look forward to another season of educating and informative lectures, delivered free of charge to anyone who would care to come along.

And the winner is...

In September we offered the extremely desirable prize of a bottle of Benromach 10 year old malt for the best photo of "fun on a trip to Glencoe". We weren't looking for fancy landscapes, or carefully composed masterpieces, but simply something that said 'I went to Glencoe and I had some fun'.

We received far more entries than we ever imagined we would, and the photos featured a huge range of subjects, from bare feet in the Boots Bar, to bare arses on mountain sides.

All the entries can be viewed in our Facebook gallery.

At the risk of sounding like dear old John Craven on Countryfile, we seriously took a huge amount of pleasure from sifting through the many photos. Thanks! And choosing a winner has been really hard. However, choose we must, and this is the winning entry. 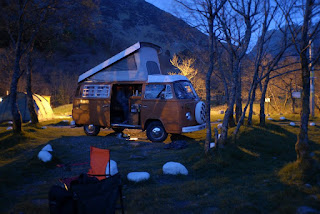 Congratulations to Guarav Shandilya for this cracker. We can't imagine a more fun time than a bit of a road trip in the old vee dub bus, a bit of camping, a walk up a hill (the Pap as it happens), and a few beers at the pub. Good one! Fun times.

Shandy wins the coveted bottle of Benromach 10 Year Old. Pop it in the locker ready for the next trip!