Finally, Phase I of the car park extension works is finished. Ok, there's some signs to add, some grass seed to sow and a fence or 2 to erect, but we're done. For this season at least! 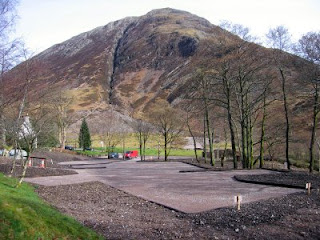 Today
The front elevation of Clachaig has been transformed. 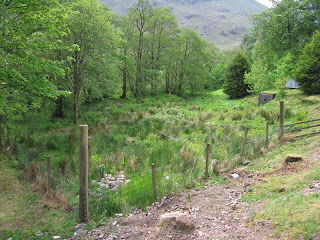 Last Summer. Most of these trees have been retained.
In the process we've added in a dozen or more extra car parking spaces and included a couple for 'oversized' vehicles - ideal for those mini buses we see so many of these days. There's signs that the grass (and the weeds) are beginning to grow, despite the frost this morning, and so we'll be out sprinkling the grass seed fairly soon. 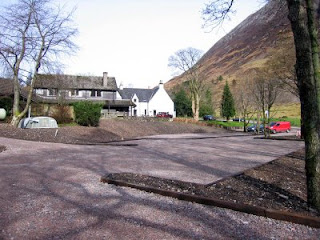 We're having slight problems deciding on what to do about the proposed childrens' play area. Our aspirations for the most modest of facilities have come back with a 5 figure price tag on them and that's without some of the ground works, but do come with a British Standard attached. On the other hand, our insurers are just interested in the British Standard (and the ubiquitous 'risk assessment') and this comes at a price. 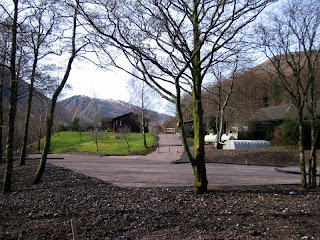 Hopefully, we'll be able to move on to Phase II in the autumn. Phase II is essentially tidying up and rationalising the rest of the car park areas, especially the existing lower car park. In its current form, the informal layout is very handy for all sorts of vehicles that we find using it (including those that just park up and disappear onto the hills for a few days). However, it looks bloody awful!

Phase II should see the lower car partially enclosed with a sleeper wall, more easily recognisable parking bays and improved signage & lighting. More news on this later in the year.
Posted by Clachaig Blogger at 05:12