A great night at Clachaig last night, very reminiscent of the good old days, as we enjoyed Paul Pritchard's lecture The Longest Climb. 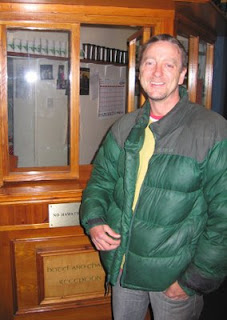 Paul Last spoke at Clachaig some 12 years ago, around the time that his first book, Deep Play, was released. On that occasion he wowed a full house with his amazing photos of the climbs that he is famous for. The book went to win the 1997 Boardman-Tasker Prize for Mountain Literature.

Shortly after that, whilst attempting to climb The Totem Pole, a sea stack in Tasmania, Paul was struck on the head by a large rock. He miraculously survived the accident but now suffers from hemiplegia. The story is told in his book of the same name which aain won critical acclaim. Paul is the only author to win the Boardman Tasker Prize twice.

The Longest Climb covered his early climbing exploits through the 1980's and 90's, the acccident on the Totem Pole and his long battle to continue with an adventurous lifestyle in the period since.

It was an inspiring talk, and it was also fantastic to see Paul back in Glencoe again. As we put him back on the train this morning, his parting words were, "Maybe next time I come back I'll have a go at the Aonach Eagach ridge".

The lecture was a fringe event in the Fort William Mountain Festival. Paul is speaking at several venues around the UK and Europe during the course of the coming season. Contact him through his web site if you'd like to know more.
Posted by Clachaig Blogger at 06:10