Looking at the Glencoe hills today, it doesn't look there'll be much in the way of avalanche activity. After months (yes, months) of cold weather, we've finally had a good old west coast thaw, and it's all looking a little spring like out there. 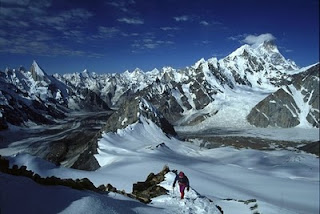 No, not a view of Glencoe today
The rather exceptional conditions of the last couple of weeks have passed (though it's still very much winter at 1000m). And there were plenty of exceptional avalanches. The upper part of the west face of Aonach Dubh, the face to the north of the Red Burn on Ben Nevis, a huge slide on Creag Meagaidh, and some tree-busting snow on the approach to Sgurr a'Mhaim in the Mamores to name just a few. And all these avalanches have something in common, apart from the fact that by Scottish standards, they were fairly big. The debris from each one crossed onto usually 'safe' paths, and this has created much discussion in the hillwalking world. But this blog isn't about that debate. Instead, it's about my holidays, quite a few years ago. 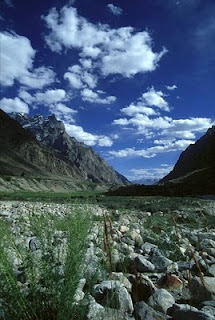 Summer in the Hushe Valley, northern Pakistan
I know, it's supposed to be about Glencoe. There is a link, albeit tenuous. And the link is avalanches that encroach into 'safe' locations. 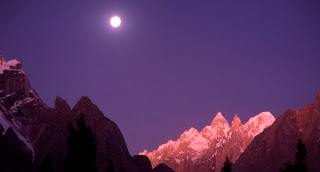 Moonrise over K6, or K something or other anyway
It was a trip to a small trekking peak in the far north of Pakistan. We were a small group, and 3 of us had just flown across from India where we'd been biking over the highest road pass in the world, the Kardung La in Ladakh. We were fit, going like express trains (until we took the porters on at a game of cricket at 14,000 feet at least), and the sun was out. It was a superb trek into some of the most spectacular scenery on earth. 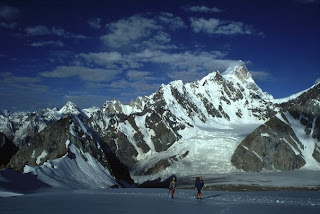 Crossing the glacier, early morning on summit day. Masherbrum behind.
One of our number had transferred to our trip from another one which hadn't run. That one was a trek. This one was a trek with a bit of a climb in it. Climbing wasn't on the agenda and so there wasn't a huge amount of enthusiasm for taking on the climbing bit, despite the fact that we were effectively 3 experienced climbers and just 3 trekkers. Whilst certainly not 'guides', we had it fairly well covered when it came to keeping an eye. 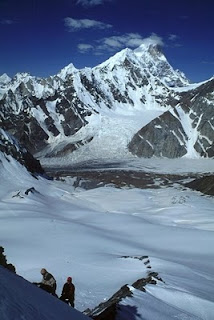 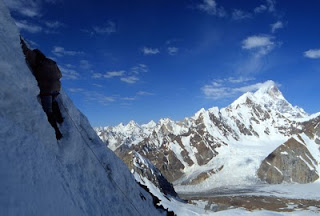 Just about to 'top out' on the summit ridge.
Off we went. It was a ridiculously early start. Headtorches for the first couple of hours, a stunning dawn on the glacier beneath Masherbrum, and then a morning ascent up to the steep bits to the top. And what a view! Base Camp was clearly visible on the glacial moraine below. The views from Trinity Peak down to Layla Peak and beyond were just something else. As we sat in the warmth of the sun, we thought about our trekker who'd decided to stay in Base Camp. 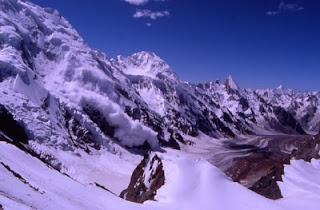 The avalanche came down from high up on Trinity Peak - and kept on going
And then we spotted the avalanche. It came from high up on Trinity Peak. A huge cloud of snow rolled down the mighty face, billowing and growing as it went. Cameras clicked and we looked on as we witnessed it's progress. But then we realised that it wasn't stopping. The big cloud reached the bottom of the slope and then continued across the glacier, over to the far moraine and straight on towards - Base Camp. 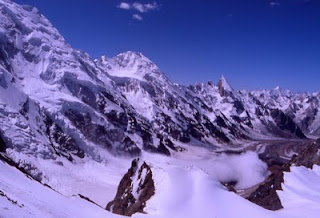 Base Camp - there under that white cloud!
We were relieved to find that the experience in Base Camp hadn't been too harrowing. They too had watched the avalanche tumbling down the slope. And across the glacier. A huge wind blast hit the tents and for several minutes everything disappeared in a blizzard of icy crystals and snow. By the time we returned the sun had melted all evidence of the incident, and the porters had sorted the tents out again.

But it left us all wondering. Tiger or Sheep? Which life to lead?
Posted by Clachaig Blogger at 14:02